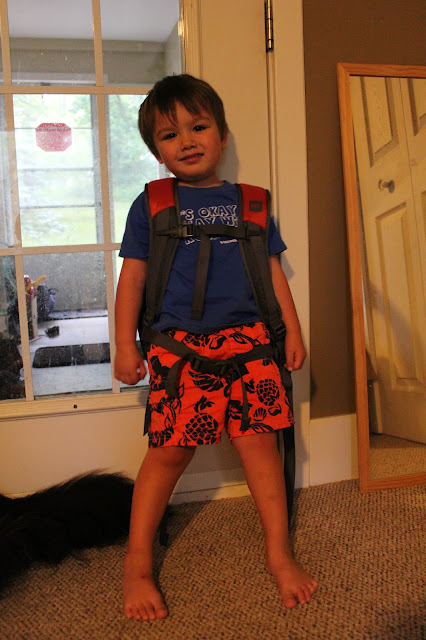 For the last week, Emily and I have been preparing Everett for the major life milestone that would be his first day of school. Though considering Everett never had daycare or an older sibling, school isn't anything more than some word and the thing that will stop him from having "Grandma Day" in the middle of the week. The real reason for the constant mentioning of school and talking up the big day has been to actually console myself and convince me that indeed Everett going off to school is a great thing.

Everett vanishing for seven hours a day has some incredible upside with the biggest being that an entire block of time will be devoted to my writing career that won't be interrupted by declarations that I'm now Baloo and we much dance to "The Bare Necessities." But the seven hours of uninterrupted time is also something I've lived without for 3 years and the days just aren't going to be the same without my imaginative and energetic buddy constantly mixing things up. 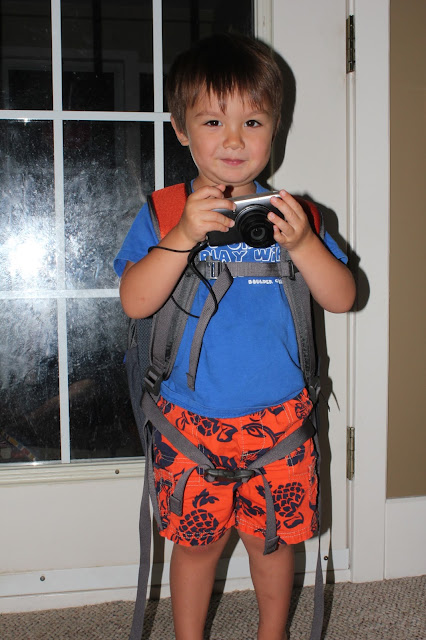 To be honest, my own despair and fear of Everett starting school has less to do with his absence and more to the fact this is indisputable proof that my baby boy is growing up. From this point on in his life, he is going to have some kind of responsibility during weekdays. It is also the first time that he will be away for a long period of time and have other influences latching on to him. It is step one in tarnishing his innocence or at least, my own manufactured version of his innocence that I've been promoting for his entire lifetime.

Many of the funny quirks and thoughts that Everett has showcased are now destined to either evolve or be entirely wiped out as he gets exposed to new kids and presented with different worldviews. This is all great, but part of me wants to snuggle with him and never let go of the boy who believes (and sees) a hippo lives in our pond and that when you burp the food in your stomach is pushed into your feet.

Today was the day everything was about to change and Everett was going to become a student. Except it wasn't. Rather it turned out to be my first experience with the joys of school administration and a reminder why it is great to have a grandma nearby. 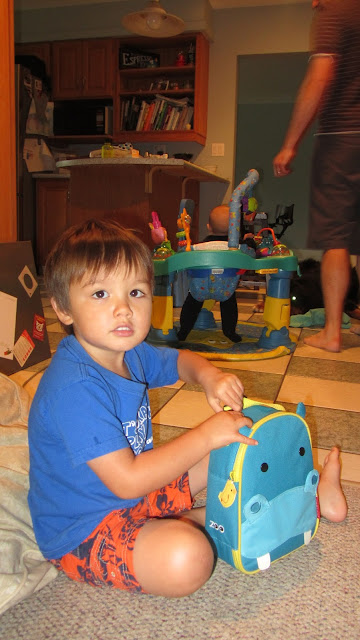 The problem all starts with me, which Emily will attest is often the case. The plan for the last year has been to enroll Everett in the local French Immersion School. We heard the very dangerous words of "if you live in the surrounding area of the school then you are automatically accepted." So, that gave us the leisure time to debate if we enroll Everett, especially since Emily wasn't entirely convinced she wanted to go this route over the traditional elementary school in our area. June seemed to be a good time to finally getting around to that whole enrollment thing, and it was then that we were informed that Everett was on a waiting list. My first lesson in not trusting what I'm told.

Since the school of choice was no longer a definite thing, I quickly enrolled him at the public school in our area. Then it was the summer waiting game of finding out if we'd get our first choice but safe in the knowledge Everett was officially enrolled in the second school that was a real guarantee. 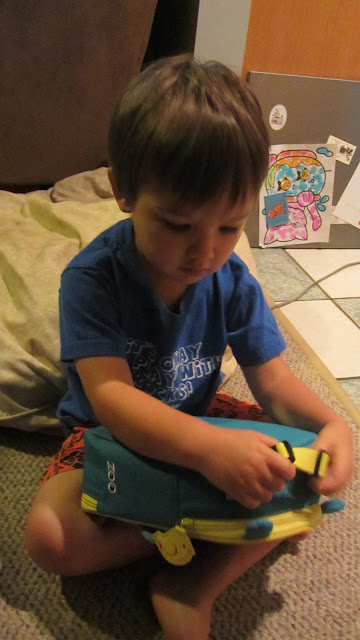 Last week, we got the phone call that Everett was still chilling on the waiting list and it would remain that way when school started. He may still get into the school, but for now it was recommended he goes to the school in his area. We actually received a package that comfortably explained everything I needed to know about the French Immersion School. I didn't have a single thing from the other school other than some fresh new anxiety over what war zone I'd be throwing Everett into.

I made a phone call in hopes of getting some reassurance or least confirmation on what first day of school protocol would be like. The person I ended up talking to was obsessed with Everett's urinary habits rather than letting me know much about the school. What I did get out of the conversation was that I take him to school on the Tuesday at around 8:45 and his name would be called out by his teacher. It seemed easy enough and I was glad to know that the binge drinking could begin promptly at 9:30 after Everett had been dropped off and I got a good cry out of my system. 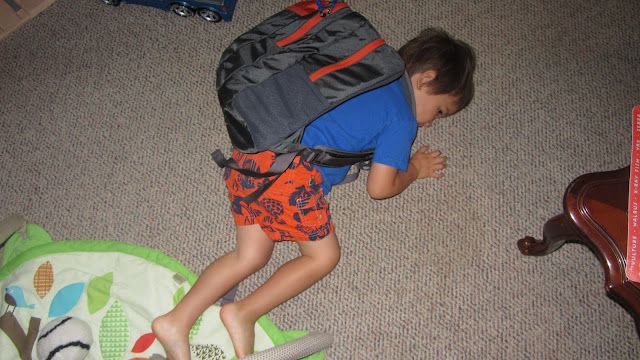 Thus this whole past weekend we hyped Everett up for his first day of school. I started practice "not crying in public." Everett got what I assume was a good night's sleep and I woke up every other hour after dreams about Everett being swept away by an underground Jell-O eating cult.

I got my first taste of a wonderful school morning where I orchestrated a song and dance routine to get Everett to roll out of his bed. I continued to get him juiced up for his exciting first day while he would rather watch videos about animal noises. He was finally riled up to go, then the phone call came.

A phone call from his teacher. A lady who seems really nice and will likely be an amazing teacher for Everett. Except he didn't see her today. It appears that Everett's school still adopts the staggered days. Something that would have been nice to be told in my conversation last week or read on the school website that doesn't seem to have been updated since April (but I at least know all the pizza days that were planned for that month; I'm sure they were delicious). Today was only for the Senior Kindergarten kids, then half of the JK on Wednesday, the other half on Thursday, and then the whole party on Friday where things swing into routine. 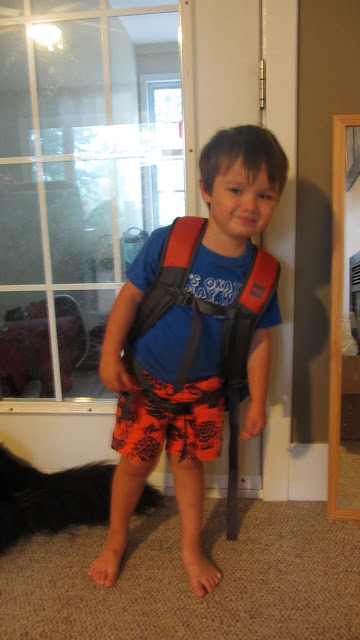 Now, before you sharpen up the pitchforks and light the torches, the teacher is innocent here. I'm not just saying that because she has a really cute phone voice. To her credit, she sent out an email detailing school routine at the start of August. Something I missed because even though I registered months ago, apparently Everett's name didn't show up on her class list until this past weekend. Which started making me wonder if Everett would have even been registered if I didn't make my "overly concerned parent" call last week.

She did give me the option to take him in today. This also meant that my 3 year old who has never gone to day care or anything resembling school gets to spend his first day with kids that will likely tower over him and be at least a year removed from "accidents" Even though Everett was in school mode and very excited to head on the adventure, I also wanted to make sure his first day sizzled and rocked and was as cry-free as possible (at least for him).

Of course, this means he was bummed by the "no school" news. He wasn't really up for an explanation. But what he was up for was going to "Grandma School" where he currently is and enjoying one last weekday where she throws all her attention upon him.

This is why it is good that I never followed the dreams of 18 year old Christopher where I moved out to Vancouver, because that would have been an awfully long trip to cheer up my little student. 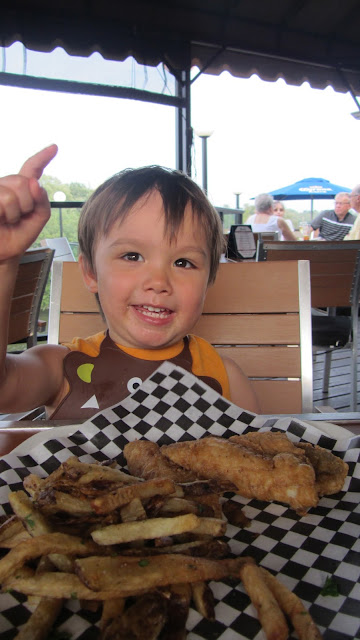