For All Those that Thought 'Creed' Signified a New and In Touch Sylvester Stallone. . . 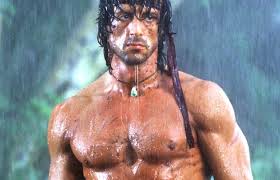 There were massive celebrations in the streets when the Ryan Coogler directed and Michael B. Jordan starring Creed turned out to be an excellent addition to the Rocky franchise. Okay fine, it was just me loudly humming the classic theme of the original while shadow boxing my way home after seeing the fantastic film. I was delightfully surprised that it wasn't about Adonis Johnson failing in the ring so that Rocky Balboa could win the title one more time. Sylvester Stallone remained a supporting character while letting Jordan shine, and in turn Stallone may have earned himself a serious shot at a Best Supporting Oscar due to delivering one of his best performances in several years (if not decades).

I was all ready to declare that Stallone finally seems to have come to terms with where he is in the entertainment world and he has stopped flailing for that action and blockbuster star golden ring. I was hoping we'd maybe get a few more heartfelt and surprising acting showcases in some understated dramatic roles.

And then Deadline reported that there are serious plans for a Rambo TV series, which will be about Rambo and his son, J.R. Of course, it has to be called New Blood, because they have to make up for the fact that the fifth Rambo never was released so we were robbed of the title Last Blood (I believe that was the one where Rambo hunted Osama Bin Laden but then real Americas soldiers had to spoil that). Now, if they really want to spread out the franchise with video games, web series, stage musicals and talk shows then we can also finally get More Blood, Red Blood, Smeared Blood, and No Blood.

The biggest news is obviously that Stallone having a more understated role in Creed and not even having his grubby finger on the script was a fluke. A fluke that our beloved champion of action cinema won't allow to happen again. Apparently, there are even rumbling of an Expendables series, and that franchise will likely have roughly 8 more sequels to allow every aging action star a pay day. I'm sure by the end of this week that we'll also learn about the Netflix series for Tango & Cash, the animated adaptation of Cobra, and the remake of Stop! Or My Mom will Shoot (rest in peace, Estelle Getty).

The second biggest news is: when the hell did Rambo find time to settle down and have a kid while he was busy blowing up communists and small towns? Is this canon? Did he mumble something about a son right before he blew that soldier out of his boots? I'll assume that J.R, did exist prior to this, but that doesn't mean anyone wants to see Rambo in a weekly series especially with his son tagging along. We've already seen what happens when you throw in a sudden offspring to a beloved franchise with Indiana Jones and the Kingdom of the Crystal Skull. Which actually makes me wonder if in-between watching all his movies and hiding under paper bags, if Shia LaBeouf would have time to play J.R, and kill this franchise too. I'm all for more reasons to not watch it.

For something really different, I think they should make this a half hour family sitcom about Rambo trying to make up for J.R.'s lost childhood. They can have an episode where Rambo over throws the ball during a game of catch and it goes through Colonel Trautman's window and they hide behind some rose bushes. But then J.R. teaches his father the importance of honesty and they come clean at the end while piano music plays. I also think each week Rambo does something to Trautman like smear mustard on his new tuxedo or sell his car for an ice cream cone, but then must apologize every week. This type of storytelling will allow it to last 12 seasons, I'd guess.

There is debate if Sylvester Stallone will star in this or just produce. I think we already all know the answer. If Shia can't get cast, then Stallone will just end up playing Rambo and his son.