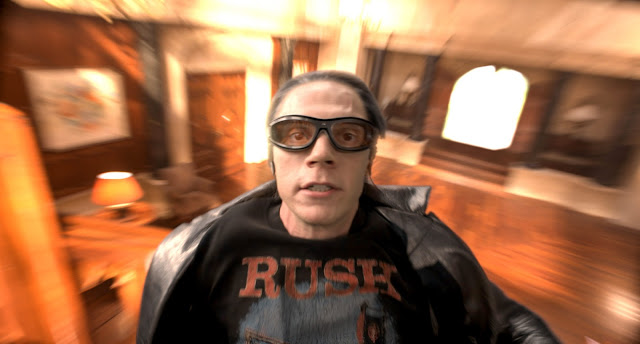 There is a bit of a feeling of coming late to the party when you're the fourth super hero movie to be released in a span of four months. X-Men: Apocalypse battles the supposed superhero fatigue by being bigger. The problem is how the filmmakers decided to be bigger by stuffing a seams busting level amount of characters. This leads to a first hour where we hop from character to character with each getting an introduction and mini-origin story. It not only leaves you with the feeling that 10 different movies have been stitched together, but I was scrambling under my seat for the hidden guidebook that helped me keep track of everyone.

I understand that director Bryan Singer and screenwriter Simon Kinberg were facing the challenge of needing to introduce new mutants to service the loyal fans and also needing to re-introduce old characters who have fresh backstories and are played by new actors thanks to the alternate timeline created in X-Men: Days of Future Past. It's a clunky and disjointed first half as we jump around meeting Scott Summers/Cyclops (Tye Sheridan), Jean Grey (Sophia Turner), Psylocke (Olivia Munn), Ororo Munroe/Storm (Alexandra Shipp), Kurt Wagner/Nightcrawler (Kodi Smit-McPhee), Angel (Ben Hardy), and Jubilee (Lana Condor). On top of that we need to catch up on the stories of returning characters Charles Xavier (James McAvoy), Erik Lehnsherr/Magneto (Michael Fassbender), Raven/Mystique (Jennifer Lawrence), Hank McCoy/Beast (Nicholas Hoult), Alex Summer/Havok (Lucas Till), and Peter Maximoff/Quicksilver (Evan Peters),

If that wasn't enough, we have Moira Mactaggert (Rose Byrne) who through nosing around in Egypt accidentally awakens the first ever mutant in the deity-like Apocalypse (Oscar Isaac). You know Apocalypse has to be important because he earned the title of the movie and has an extended introduction scene in ancient Egypt to explain his several millennium-long slumber. Apocalypse isn't impressed with the 1980s (the time period for this adventure) and goes on a recruiting mission to assemble his Four Horsemen to aid him in wiping out civilization and starting fresh. An almost all-powerful villain with plans for global destruction should make for a grand-scale movie, except bad guys wanting to destroy the world is standard super-hero plot now and the threat of mass destruction often leaves the viewer wondering if they should have got extra butter on their popcorn. This is another reason why Deadpool felt so fresh because he was out to save the girl and exact vengeance against the man who ruined his life, which made it more intimate and personal.

The most disappointing thing is that the two previous X-Men movies were very character driven and delved into the personal struggles that shaped each character's actions. X-Men has worked best as an allegory for the Civil Rights movement in the 1960s and using the plight of the mutant as an exploration into race relations. The strife between mutants and humans still exist in this movie but it is blurred and pushed to the background in favour of big set pieces and action sequences.

The issue arises when the special effects and action are competent rather than spectacular. Our expectations and standards have been raised in a year where Disney created living breathing animals from CGI and an entire vibrant jungle in a studio with The Jungle Book. With a big special effects actioner coming out monthly if not more, we're now desensitized to the crushing of major landmarks or big explosive team battles, so everything here just feels like following the standard routine.

The bigger problem comes from a dull villain, which is a major disappointment as Oscar Isaac has given us memorable characters in movie like Ex Machina, Star Wars: The Force Awakens, and Inside Llewyn Davis. Isaac's immense charisma is buried in latex and CGI. The script digs any interest even further by having him spend most of the movie just bestowing powers upon his protégés rather than anything interesting. All we end up knowing about him is he wants to destroy the world but we're never really given his motivation or any sense of who he is other someone for the X-Men to topple.

Most of the other performance are solid, which should be expected with such an amazing cast of young superstar actors. The script stops us from connecting with them by either its erratic pacing or going down the predictable path.

Magneto's happy for a change, at the beginning of the picture, as he is working in a factory in Poland, keeping his mutant identity hidden, and now has a loving wife and daughter. But if you can't predict how that turns out so he can align with Apocalypse, then congratulations on seeing your first ever movie because it must be cool.

Mystique is now out trying to rescue mutants around the world, but soon realizes the one she really wants to save his her long-time friend Magneto. It is another battle for his soul as she recruits Professor Xavier, which all adds to a feeling of covering ground we've explored in every past movie.

Jean Grey and Cyclops have one of the more interesting stories as they wrestle with being outsiders among the outsider themselves by having dangerous powers that they can't control and through that they start to bond with each other. Turner does a great job of bringing layers and depth to her underwritten character, but unfortunately, the lack of focus means her and Summer's big payoff falls flat.

Flat is the key word to describe this movie, except for one sequence. There is a scene where Quicksilver uses his super-sonic speed to race through the burning mansion to save all the students while 'Sweet Dreams' by the Eurythmics plays. It is the one scene that makes you aware it is the 1980s but is also oozing with a sense of style and personality while combining thrills and an ample amount of humour. This scene proves the huge potential for this movie and shows what this entire movie should have aspired to be,
Bryan Singer James McAvoy Jennifer Lawrence Michael Fassbender Movies Oscar Isaac Review Rose Byrne X-Men X-Men: Apocalypse