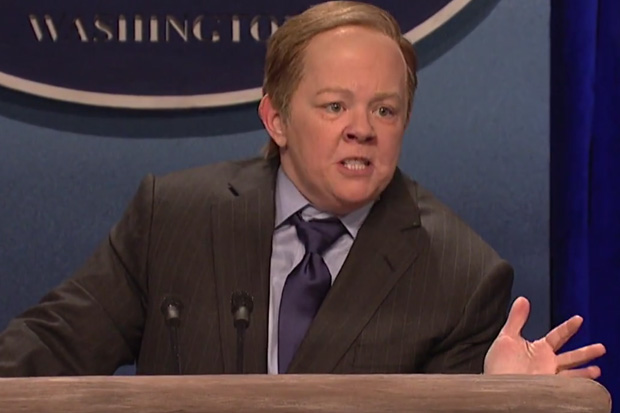 Melissa McCarthy proved this weekend that when she has good material to play off then she is one of the superstars of comedy. She is hilarious in the Sean Spicer press conference parody. Saturday Night Live, which has largely lacked relevance or consistent humour for years, showed it can still squeeze out a few truly masterful pieces of comedy that are subversive and timely. Comedy is one of the best ways to critique politics and social events, and even though this is obviously absurd and over-the-top, it nails many of the issues with this administration like their hostility towards media, everything being about placating a thin-skinned man's ego, and their quick conjuring of alternate facts. Even if one happens to know nothing about current American politics or the joy of a Sean Spicer run press conferences, this is just a really energetic and funny sketch.

The best part of it is that apparently the fact a woman played his Press Secretary really crawled up Donald Trump's pant leg and caused a searing burn. So hopefully, SNL finds roles for Leslie Jones, Jillian Bell, Rosie O'Donnell, and Meryl Streep (so she can prove how overrated she is) to get Trump dancing around.

I need to mentions that Kate McKinnon's performance as Betsy DeVos is more proof that the woman is a marvelous comedian and deserves a lead role in a big studios comedy. She has such a bizarre and captivating charisma that makes everything about her funny and the right script would make for a classic comedy.

I couldn't figure out how to embed the video from Global TV for my substantial Canadian readers but here is to the link to the video from their site.
Comedy Donald Trump Melissa McCarthy Musings Saturday Night Live Sean Spicer Television Video