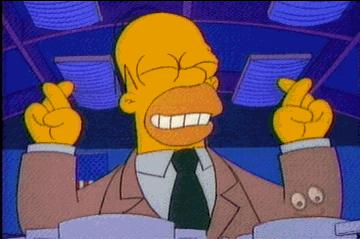 If it is on the internet then it has to be true, so you know the following 10 things will definitely be things that end up on the blog in 2018.

1. Some attempts at fiction. A few years ago, I would throw up some small pieces of fiction on here. It was usually bizarre little humour bits or some type of holiday themed piece. I may try to do some of that again, but I would like to expand a bit on my fiction writing. I've been thinking about doing a weekly serialized story, but I would like to be a few episodes in before I start posting it.

2. More pieces about my adventures in parenting. I used to write a weekly columns about being a dad for Pregnancy & Newborn magazine. I would like to at least do a few a month where I don't necessarily offer advice, but explore life as a stay-at-home dad. I also will just brag about my kids, because they are the awesome.

3. Post links to my work for other sites and magazines. Also announce cool things like landing a book deal or having a short story published in a magazine. I really want to write those things on here, because it also means these are things that I've done.

4. At least four written reviews a month on new theatrical releases. I have reviewed several new releases on The Movie Breakdown, but I want to do far more written reviews. I also will start to do more retro and revisit reviews. The hope to expand the podcast and have a large amount of reviews so I can apply to the Online Film Critics Society.

5. Pieces that are more open and honest.

6. More podcasts. Both Scott and I really want to expand and grow The Movie Breakdown. We hope this year to gain a big enough audience so that we can do a second weekly episode. If I want to be Mr. Optimistic, then try podcasts on other topics as well.

7. Thought-provoking articles on politics or news or pop tarts. I want to do far more articles that the cool kids call 'thinkpieces.' I did this far more several years ago, and while I plan to write many of these for paying clients, I'd also like to get a few pieces exclusive for here this year as well.

8. A giant thank you for all the new readers, because I've grown an audience. Or at least, gain back the audience that I lost a few years ago when I started becoming very inconsistent writing pieces on the blog.

9. More personal experiences, and especially, tackling my emotional challenges like the daily sadness, battles with anxiety, and painful self-doubt (and real bad days, hatred). It will both be therapy but also, hopefully something other people can relate.