How Does He Do It? 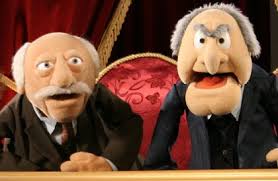 There is a movie blog that for the last several years, I've checked out every few months then I immediately plunge into great shame for wasting my time in such a horrid way. The writer has been a journalist for at least 40 years now and has some very deep connections in the industry. He has written for some high-profile pop culture magazines and websites, but as far as I can tell, he has been writing exclusively for his blog/website since about the mid-2000s.

He usually churns out about seven to nine pieces a day, some being only a hundred words and others well-over a thousand, and usually does a few movie reviews a week. He is a decent writer but there is at times pretension that wafts out of his prose and a forced attempts at being poetic or philosophical. It isn't the wording that causes the deep regret that I feel for wandering on to his space of the internet. This is the guy who a few years ago got some mainstream attention for a quick piece reviewing the first trailer for Trainwreck by bemoaning the fact that someone of Amy Schumer's figure was not only given the lead in a romantic comedy but we were to believe several men would actually dare to sleep with her. This also was not a one-time thing, it is kind of his gimmick to spend words upon words about the looks of stars and getting furious that not everyone on the big screen is drop dead gorgeous. He also often likes to give advice to older actors about getting some cosmetic work done, because obviously, he is a ravishing Adonis that earns the right to criticize such important movie skills as looks.

He doesn't just rip on the looks of movie stars. He also often will criticize the general movie going public for being Neanderthals because they dare to enjoy dreck like comic book movies or laugh at family movies. If that isn't enough, then he bashes fellow critics for daring to like stuff that he despises. If you think that the internet needs more toxicity, he has some general tossing of contempt towards anyone that isn't just like him. He doesn't just write about movies, because it is really a blog, he also occasionally posts some stories from his personal life, which is almost always him complaining about people he had to interact with that day or making himself seem like a victim when someone is upset over him being an asshole

So, why do I subject myself to this nasty filth?

A small part of it is that during an era of political talk radio where political parties are portrayed as sports teams and conservatives will jump through hoops to praise all things from the right and liberals will defend anything from the left, it is intriguing to see a guy who identifies as a liberal and a Democrat that constantly writes things that infuriates people from that end. He is his own unique little creature that doesn't mindlessly follow one side of the spectrum.

The main reason I keep checking in is that I am just captivated by his success. He is able to afford to go to several film festivals a year including the big ones in Sundance, Cannes, Telluride, and TIFF. From the best I can see, he is making a living entirely from writing for his blog, and doesn't need to do any other freelance work. He has deep connections with those in the movie industry and is able to get big news from the movie studios. His only source of income that I see is the banner ads that he has on his site, which are always for upcoming releases (which I believe he arranges directly from a studio).

I just keep coming back, because I am amazed by how he does it. I try to figure out how he actually makes a living from his blog. If it is just the few banner ads, then that must mean he lands millions of readers on a monthly basis and has a huge following to make the few ads very lucrative. Though his Twitter account shows a very admirable following, but not one that would make me think just a few ads is enough.

Maybe he made smart investments a few years ago? Maybe he won a rather lucrative lawsuit? Maybe a small indy studio is paying him to rip on all the big studio movies? Maybe just maybe he does make enough movie from those ads, because he gets a huge amount of readers every month. He also is the lone writer, so he is only needing to pay himself and his webmaster. This still means that his negative and toxic words draw in an army of people.

It shocks me, because he isn't the only movie writing freelancer that has a name or following. Nathan Rabin is a former head writer for AV Club and The Dissolve (RIP) but now is running his own personal pop culture site, but in order to make a living he needed to set up a Patreon site and even then, still has to do freelance work for several other sites. Drew McWeeny is another distinguished film critic who now is freelancing and his main source of income is selling e-books on his website and having a Patreon for his 80s All Over podcast. Eric D Snider is another really talented and positive human being, who has his own website but yet again needs a Patreon to fund it (as well as a Patreon for his Movie BS podcast), but still needs to do editorial work on the Crooked Marquee website to make a living.

My point is that these are really talented pop culture (film) writers that I want you to follow and support if you can, but I am also just baffled they haven't found the same ease of success as Captain Grumpy Pants.

Maybe it is that the above worth supporting writers admit that they would rather write the things they are passionate about. They want to do film reviews or delve deep into analysis of movies. The cranky body shamer plays the game of Oscar predictions, trailer reviews, analyzing press releases, talks politics, while also doing movie reviews, so he writes about the stuff all the big mainstream websites do as well (but with his unique slant of insults and negativity). Part of me likes to think the other writers could have made money off just banner ads if they were willing to play that game while also doing the writing they loved. A part of me fears that it is the cynicism and the controversial writing that is driving the one writer's business.

I refuse to promote the other writer and reveal who he is, because I dropped enough hints to make him really easy to find. Besides, I help him out by going against my best instincts and checking him out a few times a year anyway, I just have to accept he has found success and applaud him for that. As for my own dear readers, please check out the other writers that I mentioned because they are quite tremendous.