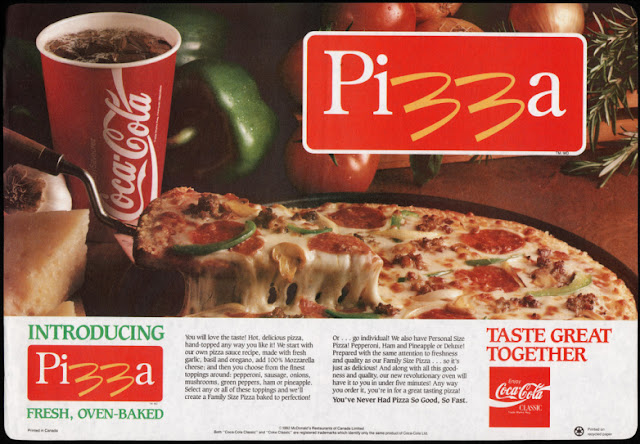 I'm always fascinated by the evolution of major companies and the different ways they try to reshape or rebrand themselves. It is interesting watching successful companies try to branch out by offering different products outside of what made them successful, as well as the different forms of marketing they try to use to capture a consumer's imagination over their new offerings. One of the reasons McDonald's has been a global powerhouse in the fast food industry (and essentially, the company that invented the industry), is that they are always trying out new food items and attempting ways to break into different markets.

A lot of risks have paid off as they've become the champion of breakfast with their coffee and Egg McMuffin sandwiches (I'm positive when this was introduced that there were many analysts betting against them), made an iconic burger like the Big Mac, won over children with the Happy Meal, and offered more than burgers with a huge hit like Chicken McNuggets.

All those major victories have brought along a fair amount of big financial losers as well. The part that I find really fascinating as shown in the Watch Mojo video below is that many of the flops were not all caused by the food tasting awful but actually were decent (for fast food) dishes that misfired for other reasons. It was over stuff like creating a menu item that was much better and more established elsewhere (Mighty Wings could never replace Buffalo Wings) or food that contradicted the reason people went to McDonald's (pizza isn't a great item for a place that promises food ready in minutes). I love digging into the history of a company that took various gambles and I am also amused by some of the obvious wacky "how did they think this would sell?" attempts.

While watching this video, I was surprised by how many I did not remember or ever hear about (the chopped beefsteak sandwich looks to be before my time but surprise its legend alluded me until now) but others were a fresh air of nostalgia as I remember the big marketing blitzes. I had a friend that swore by the McPizza and said it was better than any other pizza. I remember trying it and deciding it wasn't worth the wait. I also remember a marketing campaign where McDonald's was going to start delivering their pizza but not sure if that ever made it here to Brantford (my dad stuck to the dinosaurs like Domino's or Pizza Pizza). Considering my deep love for wings, I feel like Mighty Wings must never had made it here either because I never tried it. I do remember the Arch Deluxe, but can't remember if I ever sank my teeth in one. I also remember as even a highly impressionable to hype and marketing kid that the McDLT sounded like a really stupid and more work than it was worth idea.

This was a fun nostalgia trip and a great ride for pop culture history nerds like me.