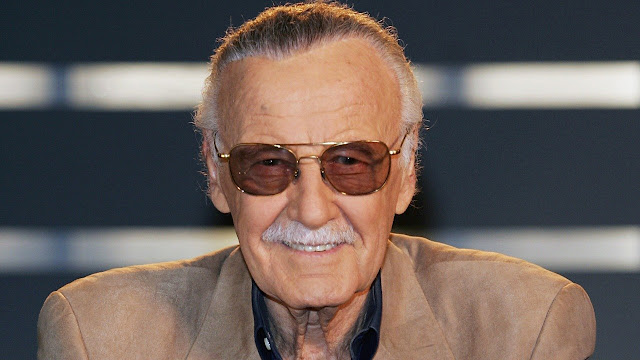 Stan Lee passed away at age 95. As a kid who collected comic books, I looked up to Lee as an inspiration. My skill level as an artist was one where you could make out that I drew a bird by it having wings. It was an inspiration to me that Lee was an icon in the comic book world mostly through his writing and imagination. It was encouraging to know that comic books needed more than just great artwork but people who can craft compelling stories and complex characters.

He played a huge role as the co-creator of many of the most iconic superheroes including Spider-Man, Iron Man, Black Panther, Incredible Hulk, Thor, Ant-Man, Daredevil, Fantastic Four and the X-Men. As a kid, I always wrongfully assumed that he was the owner of Marvel comics, because he had his monthly column, Stan's Soapbox, in every issue of Marvel's comic books. His editorials were a balance of humour and social discussion, and often were some of the most entertaining and informative parts of the comics. Even though he was not the owner or founder of the company, he did become the face of Marvel.

There is some dispute over how much he did creatively, but despite that, he is credited for shaping Marvel into its own distinct comic book powerhouse. Those editorial made it clear that he was imaginative and passionate, and he saw the medium of comic books as more than just child entertainment. He wanted them to say something and even drive positive change in society. He was one of the first where I learned that mainstream entertainment can both be exciting but have deeper meaning and be about important issues.

I was never part of the DC Comics vs. Marvel Comics divide as a young collector, and I was a big fan of Batman and Superman. It is pretty hard to argue that people like Stan Lee, Steve Ditko and Jack Kirby reshaped how people saw comic book storytelling and played a role by indirectly improving DC Comics. Prior to the 1960s, the superheroes were mostly one dimensional and straight-forward unshakeable virtuous heroes. Lee and company created heroes who not only had cool superpowers but were complicated and nuanced.

The characters were often allegories and metaphors for deeper issues. Spider-man and his powers represented puberty and the challenges of a teenager. The X-Men symbolized the civil rights movement that was growing at the time. Professor X and Magneto helped represent the real divide that existed among factions that were seeking justice and equality.  But these comic books were nuanced and challenging even without any of the symbolism or metaphors.

Lee created heroes that had struggles that the average person faced. Peter Parker was a hero that battled evil super villains but he also was worried about asking a date to the first dance or dealing with acne. Tony Stark struggled with alcoholism, and Bruce Banner has more issues than just turning green and monstrous. None of the new heroes were purely good, but wrestled with their egos or depression or anxiety or various problems that every person encounters. I connected with these characters because there was authenticity to them even if they had powers that were pure fantasy. It was through comic books as a kid that I learned about layers in storytelling and deeper characterizations.

It was Marvel's gamble on more complicated stories that I think forced DC Comics to really add depth and create some of their most interesting story arcs in the 1970s and 1980s. Lee played a huge part in changing perceptions of comic books and crafted stories that eventually would be the inspiration for the big blockbusters that flood the big screens today.

Of course, even if you are not a reader of the comic books, then you know Stan Lee as the older gentleman who has a fun cameo in every Marvel movie. I know that is something many movie fans will miss.