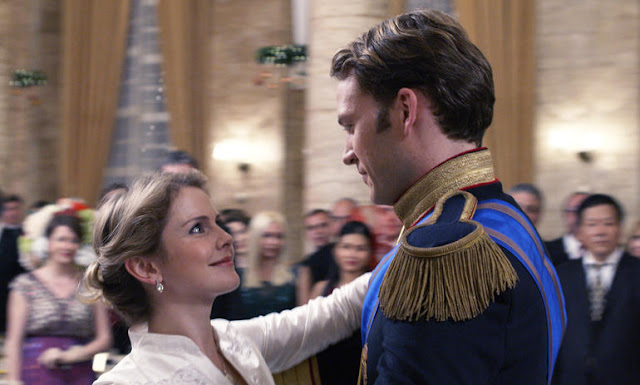 You know that Scott has been counting down the days for this one. Last year on our The Breakdown of the Worst of 2017 show, he gave his number one spot of the worst of the year to A Christmas Prince beating out stuff like The Emoji Movie and The Bye Bye Man. Now we all get to return to the kingdom of Aldovia for A Christmas Prince: A Royal Wedding.

Last year, we both declared that we didn't know who the original movie was targeted towards and thought it even failed at being a Hallmark movie. Well, a year later, I can confess that even though I still don't think it was a good movie that it did know its audience and was a bona fide hit on Netflix. It seems some people want hammy acting, cheesy dialogue, contrived plots twists, a world less realistic than Narnia and diabetic inducing sentimentality in a cheaply made Holiday romance movie.

Netflix looks to be committed to making a few of these every year to be released around the Christmas season. Scott and I will be just as committed to torturing ourselves every year as we pull out these lump of coals for our listener's enjoyment.

The latest trailer shows that this one may be even more painful and eye-roll inducing than the first. Considering how popular actual royal weddings are on TV, I think this is a pretty genius idea for a sequel, even if it is 90 minutes that I'd rather use plucking my unibrow with a monkey wrench. You can't fault them for going all in on this schlock. I know at least one of you is pumped to the heavens for this, and you can keep it to yourself if you want.