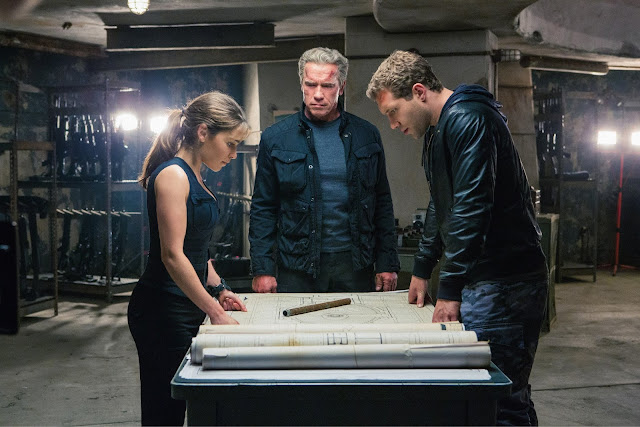 I hope everyone has had a chance to listen to (and enjoyed) yesterday's episode, 'The Breakdown of Modern Movie Trends.' We talked about a lot of the things that we keep seeing be done by major studios and were able to analyze some of the studio's strategies. I wanted to expand slightly on two things that we talked about.

The first one is major studios' obsession with having a final scene or stinger to set up a sequel. Now, I realize that studios since the time of the cave people have had hopes of making sequels with dreams of filling up all their caverns with cash. As I said on the show, I have appreciated that more movies recently seem to have a stand-alone feel and have left the sequel stuff to the very end of the movie, so the narrative doesn't get bogged down with teasers that don't get paid off in the two hour run time. But teases not being paid off is still an issue.

The problem with having a cliffhanger ending or making the movie feel more like a 'chapter one' or leaving heavy hints towards a second movie is that there is no guarantee of a sequel. As I said before, studios have always had their eyes on sequels but it is in the last decade where they've become so open about it that they will pencil in dates for a part two and three before the first movie is even released. I'm all for confidence, but sometimes I wish they'd be more focused on making sure the original is actually worthy of making more.

While Terminator Genisys doesn't fit the whole 'stand-alone' feel that I attributed to this year's movies with eyes on sequels, but we mentioned this movie enough on the podcast that I think it is a worthy example to explore. There was so much confidence that Genisys would be a hit because who hasn't once jokingly bellowed "I'll be back!' that not only did they slot out dates for the next two sequels but it was a movie that necessitated a sequel to make sense out of the plot. Not only was the movie littered with hints towards the next instalments, but most of the story points were left ambiguous or dangling with the idea that it would be resolved in the next movies. Except Genisys flopped domestically and wasn't the huge hit it expected to be overseas, so they scrapped the sequels and we are now blessed with an upcoming reboot (because despite a tepid box office, fans are demanding more, I guess).

The biggest issue with the Genisys failure is that for those who actually dug the movie and were intrigued by all the mysteries, it will never be resolved for them. All they have is the barely comprehensible movie that was designed to set-up further stories.

Genisys isn't the only culprit. There has been a bazillion movies in the last few years that have had either cliffhangers, mysteries or giant teases towards a second movie that will never be paid off due to failing in the box office. Off the top of my head some of the biggest examples of movies that will fail on their promises for more are Independence Day: Resurgence, The Darkest Minds, Gods of Egypt, Fantastic Four, Allegiant, Pan, The 5th Wave, The Snowman, King Arthur: Legend of the Sword, The Mummy (and the ending the Dark Universe), The Dark Tower, and Robin Hood. I am missing a bunch but that is a lot of movies leaving its fans unsatisfied with incomplete stories.

I am sure that when the original Star Wars, Raiders of the Lost Ark, Gremlins and Ghostbusters were made that there was an eye on being able to make more. But all those movies are completely stand-alone and tie up major story points, and are still great if no other movie was ever made. Many of the previously mentioned movies rely on a second film to complete the story that is now not being made. Some of the box office failures of these movies may come from the fact that some interested movie goers will notice that the opening weekend is tanking and heard the movie is just set up for more, so why bother if the payoff is clearly never going to come now. I'm not saying that if those movies resolved everything they would have suddenly become hits, but knowing the resolution will never come may be enough to convince some to make it a Netflix night instead.

The second thing that I want to elaborate on from the podcast is movie studios banking on recognizable characters or stories that the general public isn't that interested in seeing. I forgot to mention on the show that this isn't just a movie problem. It is something that is becoming very prevalent in TV too. I think the problem is that both mediums have so much content that studios believe they need well-known names to break through the pack and get eyeballs on their movie or series. Television has had success like The Connors, Fargo and Riverdale, but they've also seen just as many failures in stuff like Murphy Brown, Charlie's Angels, Magnum PI, Limitless, Minority Report and Taken. I think in every case that what Scott said on the show stands true, it needs to be a blend of nostalgia with something captivating for new audiences.

Movies that fail to have those sequels often suffer from leaning too heavy on nostalgia rather than crafting a new and exciting story that is enhanced by tidbits of the past. Nostalgia has to be the icing, and storytelling is always the cake.
Movies Musings Terminator: Genisys The Movie Breakdown