'Godzilla: King of the Monsters' Promises a Giant Monster Mash 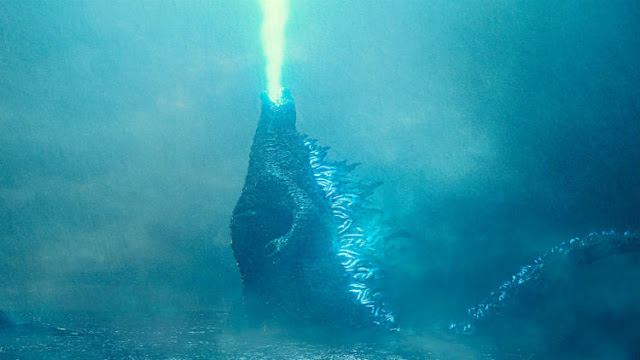 Last summer, there were a few 'Daddy and Everett Movie Nights' where we watched some films that were a step up in mature content when compared Frozen or Zootopia, and he was thrilled he got to see stuff that had to be screened after Danika went to bed. The Indiana Jones movies  were the biggest hits and he still goes around the house wearing a cowboy hat (closest thing to a fedora), a brown vest, and a yellow rope (his whip) while he calls me Sallah and his sister, Marion, while searching for lost ancient idols and treasures. He also really dug Pirates of the Caribbean, Guardians of the Galaxy and of course, he adores Star Wars (he had to, in order to be my child). One of the other things that he really likes is playing with dinosaur toys, so when he asked to see Jurassic World, I thought we had another hit on our hands. After about 30 minutes, he started asking if one of the Pirates of the Caribbean sequels was on Netflix.

How could a boy who loves reading books about dinosaurs or spends hours playing with dinosaur toys couldn't remain hooked watching them in Jurassic World? I think, the problem is it took too long to get to the dinos and after watching him play with the toys, I think the movie just had too many humans for what he was expecting.

Now, there isn't a single dinosaur in the Godzilla: King of the Monsters trailer, but my guess is this is closer to Everett's vision of what he wanted from Jurassic World. A big giant monster battle royal. The humans seem to be an afterthought (even though they still filled it with a talented cast like Millie Bobby Brown, Vera Farmiga, Sally Hawkins, Kyle Chandler and Ken Watanabe) and the focus on big giant beasties challenging Godzilla for the throne of ultimate monster. What this movie lacks in real dinosaurs is made up with huge beasts ready to throw-down, which I now realize is probably what my young son was demanding from the bottom of his heart.

For some reason, I thought this movie was supposed to be a prequel to Gareth Edwards' 2014 Godzilla, but I must have got it confused with Bumblebee (robots and kaiju -- same thing right?). This looks to be set in a world where monsters wrecking stuff is the norm, and Watanabe and Hawkins are back from the first where they learned about the kaiju, so this is a definite sequel. Maybe I also just got confused by Kong: Skull Island, I confess that was an 'I watched it and then forgot it' type of movie, but I am positive it was set right after the Vietnam War. The point is that this isn't about creating an origin story but rather Godzilla seems to be right in the thick of some monster bashing.

Speaking of Kong, is it too much to hope that this doesn't have a bunch of set-up to the Godzilla vs. King Kong movie, but rather keep that cinematic universe gobbledy gook to a stinger?

I know there were some critics towards the last movie hiding Godzilla for most of the run time and building anticipation for the big battle at the end. I was not one of those people and just like in Jaws, I think keeping the creature hidden for most of it makes for a better movie. But I do think that now that Godzilla is established in this series, it is time to just give us some big glorious monsters matches. This one seems like it is going to be all about the slams and smashes and chaos. If it is done right and there is even an ounce of story, this could be some awesome summer popcorn movie mayhem.

They really are dishing out the monsters here too. I know there is Rodan and Mothra, and I think I may have caught a glimpse of a few other monsters too. For a guy who was once a boy who loved his creature features on a Sunday afternoon and feels like I've seen most of the old Godzilla movies, this is hitting the right nostalgia button. Now, I have about seven months to decide if Everett gets to join in on the mayhem on the big screen.