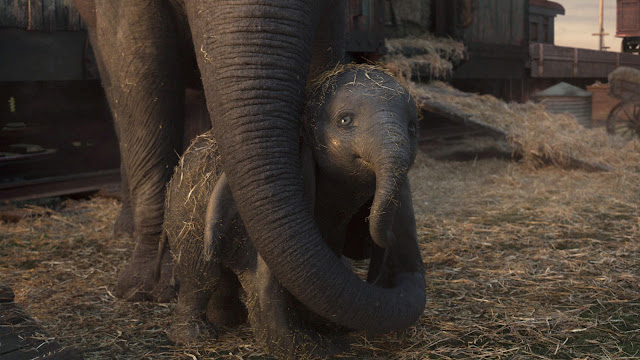 Scott is back with his analysis and predictions for this weekend's new releases. They are two very different movies, but both may have loyal audiences. My guess is Dumbo does about 10 million more than Scott's prediction and I'll keep just pretending Unplanned is a made-up movie (it doesn't look like it even got release in Ontario).

With March winding down, two films are entering the cinema landscape to scoop up your theatre dollars. Last weekend’s big winner was Jordan Peele’s horror, Us, and neither of the new films will be direct competition. One film is a Disney live action remake of one of their classic films, something that we will see two more times this year. The other film will be looking to court faith-based audiences.

Disney has proven to be very successful with their 'live-action' adaptations of their classic animated features, and this is why they keep coming by the boatloads. Up until now, their live action remakes have proved to be financial hits as well as being well-told re-workings of the story. The big question that I have about Dumbo is if it has as much built in interest as films like The Jungle Book, Cinderella, and Beauty and the Beast.

Dumbo is certainly a well-known property, but is its legacy held with the same power as those other films? If it isn’t, (personally I don’t believe it is) then the marketing is going to have to win people over. Directed by Tim Burton, the trailers didn’t sell me on it being as energetic and fun as the previous remakes. For those on the fence, the Rotten Tomato rating of 55% (at the time of writing) may put them off. Still, this is a company that knows how to get eyeballs.

Ultimately, I believe this comes down to the Disney name. The brand didn’t get them a pass with films like John Carter, Tomorrowland, or A Wrinkle in Time, but those movies are a lot different than Disney classics. I think Dumbo will have itself a healthy opening. The last big title family film was How to Train Your Dragon: The Hidden World, and that works in Dumbo’s favour. Its long-term success is going to come down to how well it holds up, as it has a pretty heft budget of around $170 million. I don’t believe it will earn the same way the other live actions have, but it could still be a hit.

This film is going to be a lot easier to predict. Dumbo came down to a calculated guess, but there is a clear history to work with here. The studio behind Unplanned is Pure Flix. They deal with faith-based movies, and those types of movies can break out and pull in good amounts of money. When it comes to Pure Flix, $4 million is the biggest opening they had for an original property. Their biggest opening came from God’s Not Dead 2, but they weren’t the ones that released the first film, which was a massive hit. The majority of their films open between $1.5 and $4 million with incredible consistency.

Not surprisingly is the fact that there have been apparently a lot of group ticket sales, which happens with faith-based films. While the movie’s topic of abortion is something that will get their target audience’s attention, the movie has an R rating. My speculation is that this will affect their success, as that does not necessarily bode well for a film aimed at Christians. Personally, I am extremely impressed with this and encouraged. Faith based films I have seen in the past portray themselves as dealing with gritty or darker issues, only to have it completely scrubbed and held in unrealistic ways. Perhaps this rating is an indicator that this film is really aiming to dig into its subject matter. The problem is that if perspective audiences aren’t scared off by the rating, the content that caused that rating may be the deal breaker.