24 Years in the Making 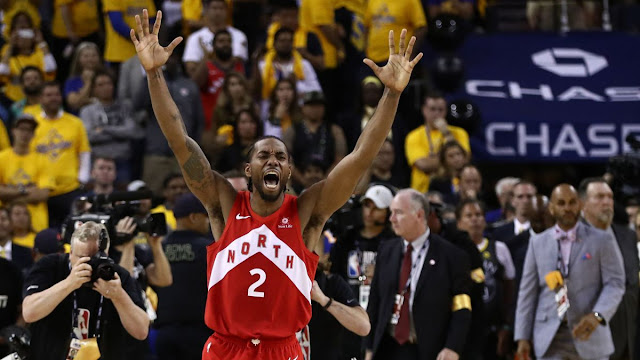 I remember the press conference where it was revealed Toronto's new NBA team would be the Raptors. At the time, I was thrilled that Toronto was finally getting a team, because I had gone to a few NBA exhibition matches that were played in Hamilton and Toronto and I was really into basketball at the time (I even was doing something sort of resembling playing the sport at the time). For a few years, I was really hoping that the occasional games being played in Ontario meant they were testing waters for a team to come to Toronto. As I excited as I was for it finally happen, I remember being a bit bummed that team name seemed to be jumping on what was hot at the time as Jurassic Park had come out in 1993 and was one of the biggest blockbusters of all-time. I thought it would end up looking really dated, sort of like naming a hockey team after a kid's movie.

Little did I know, they would still be making Jurassic Park movies 24 years later. Also, as a dad of young kids, I am now well aware that dinosaurs are the coolest thing in the world tied with magical princesses, Jedi and cupcakes. As a teenager thrilled to have NBA team, I did not know that I'd have to wait 24 years for them to finally make it to the NBA finals. But much like another Toronto based team, they won it on their first appearance.

I remember as younger kid in the late 80s becoming a big Blue Jays fan. It was the cheapest sport to take a family to see live, so we used to go as a family to a few live games a year. My dad was a big baseball fan, but he would usually really get into it near the end of the summer when the Jays were in the pennant race. Almost every year, I remember the Jays coming really close to either clinching a playoff spot or making it to the American League championship but losing out to teams like the Oakland As or Minnesota Twins. Every year, my dad would let out a big sigh and grumble that 1985 was their year but they blew it against the Kansas City Royals (I would have been turning seven but have no memory of watching it at the time). I never heard him say that again after 1992 with their historic World Series victory. My dad only had to wait 15 years for his team to win a championship.

Another thing I didn't know back when the Toronto Raptors joined the NBA, was that I would see far less games than I would have imagined. I can't even remember the last time I saw a Raptors game in person. I also didn't know that I'd end up following sports way less and have entire seasons where I wasn't paying attention to how the Raptors or any of 'my teams' were doing.

It was called life. After moving out of the house in my 20s, I lived with roommates that either weren't into sports or we didn't have cable. After getting married, it had been so many years of not really having the means to watch the Raptors that I didn't give it much thought. Emily was more into baseball than most other sports. I'd occasionally check to see how they were doing but my sports watching time was precious, so it was usually devoted to the Chicago Bears who I only needed to devote one game a week (being an out of market team, it was more like two or three games the whole season before the playoffs). Once kids came along and I started trying to get a freelance career going on top of that, I had even less time. I started writing about movies, so all my TV watching ended up being movies so that I could review them. If I was ever paid to write about sports, then things would have been different (though to be honest, movies have been an obsession since the first time I saw Snow White and the Sevens Dwarfs in a theatre, so my knowledge was always stronger for that form of entertainment).

So, even though in my teen years I thought I'd be a lifetime Raptors fans, I have to say that I didn't really experience all the ups and downs. I read articles and caught some playoff games over the years, but this day is much sweeter for those that have been cheering them on every season since their inception.

Last night, was still an amazing moment. It was a reminder why I once really loved watching sports and why I still think it is one of the greatest forms of entertainment. It is real and unscripted drama with characters you follow for years. It is something as a fan that you can viscerally throw yourself into for three hours in a night. It plays with our hearts and many times we get heartbroken. Our team comes up short, but the ride was fun while it lasted. But then you get something like last night, all those rough seasons were worth it when your team finally wins the championship.

It was amazing watching a few of the Raptors playoff games this year. They are immensely talented, but the thing that really stands out to me was that they really were a team. They have a superstar in Kawhi Leonard, but he it was clear he wasn't out for personal glory but rather to win for the entire team. They allowed every a player a chance to shine and the bench often performed when they needed to do it. It was a team about making plays and working hard together. The even cooler thing was watching them after each game. Leonard seems like a genuinely humble (or at least, as humble as a superstar can be) and down to earth person. Every player seemed to ooze respect and dignity. Kevin Lowry came off as a team leader but also one who would praise his teammates and show respect to his opponents. They won with grace last night, which was an amazing thing to witness.

This may be their job and they are making millions for doing it, but it was also great to see them thrilled to have won the championship.  They were those young boys again brimming with passion and love. It was a great moment on TV seeing them celebrate and hear them talk about winning this one for Canada. Sure, that is something to say to keep your fans happy, but they really seemed to be proud that night to be Raptors and to win for their fans.

It took 24 years, but it was worth it. Young teenager Christopher would be running through the streets screaming for joy. Much older Christopher almost left his wife hanging as she went for a high-five. It was a still great moment and it was a blast to be a fan again.
Basketball Kawhi Leonard Musings NBA News Sports Toronto Raptors