Scott Answers if 'Battleship' Deserved to Be Sunk 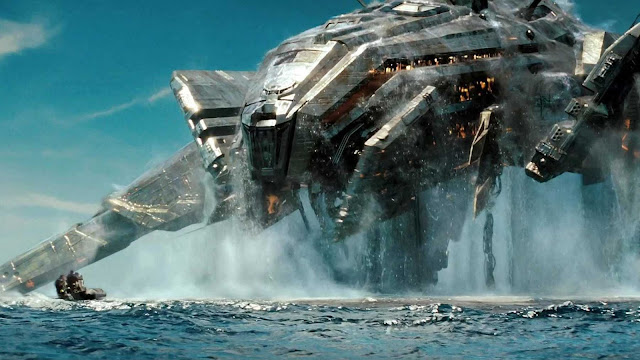 (CS: My co-host of The Movie Breakdown is back once again to see if a movie is better than its reputation. This time he looks at the board game turned sci-fi adventure from 2012, Battleship.)

Battleship. You sunk it. You looked at a graph, made an educated guess, and launched a critical hit. The game is over. You won. Handshakes all around for the ability to guess coordinates.

Thrilling, right? Well, as much as I enjoyed playing the game Battleship as a child, I never would have asked it to be turned into a feature film. There is nothing about the closed loop of the game that lends to any narrative. Dots on a board is all it is. Thrilling, right?

In 2012, Universal released the movie version of that ultra simplistic game. Sometimes a movie concept gives me a headache, but I’ve slowly learned that I can be surprised at the finished product. I end up having to eat my words, which I honestly enjoy. Being proven wrong about something, be it a person or film, may be what I enjoy most about movies. On the surface, this film seemed like a soulless money grab by people who thought movie goers were so stupid they would rush out to see anything with a recognizable name. I really did feel like there was some contempt shown towards us by the folks behind Battleship. We weren’t valued folk who should be given something of quality, but rather just walking wallets who didn’t need to be shown any respect.

The film ended up being a massive bomb. To borrow its own catch phrase, audiences sunk Hasbro’s Battleship. Critics didn’t care much for it, either. Thankfully, the failure of the film seems to have stopped a lot of movie ideas in their tracks. As Christopher has pointed out on the podcast, Hungry Hungry Hippos The Movie was going to be a thing. Thankfully we avoided that. One movie failure changed the long-term film schedule for Hasbro, but was it really that bad?

As much as I would love to say that Battleship was more a failure because people didn’t respond well to the fact that the antagonists in the movie were aliens and that the film was actually good, I cannot. This film really did feel like the money grab I assumed it to be. Watching the movie, it was obvious that this was a Transformers clone. The special effects were solid, but it had all of the trademarks of Transformer movies. Overuse of slow motion, an absurdity of loud audio effects, eye rolling plot, paper-thin characters, and the ludicrous need for a sexualized female character who was only written to be eye candy all pointed to the Michael Bay checklist.

When I say eye rolling plot, I mean it. There was a moment nearing the final battle that I believe was supposed to be fist pumping and a rush of joy and hope for the audience was in actuality a rock and roll montage with lines from people who must have been former Navy sailors and not trained actors. Speaking of such casting, director Peter Berg decided to cast a former soldier who had lost both of his legs to play a soldier with way too many lines. I get wanting to put actual soldiers in war movies, but honestly, it can really just drag down the material. When Martin Sheen played Captain Willard in Apocalypse Now, we didn’t see the army saying, well maybe we should put him in conflict zones because he’s acting like a soldier. Actors are trained to pretend, and soldiers are trained to actually do it. I doubt boot camp has sessions on projecting to the back row or exiting stage right. Just because someone is a soldier doesn’t mean they can portray that in front of a camera, and this film is an example of why that shouldn’t happen.

There was a bit of an indication to me that Berg was having a little fun. Battleship’s soundtrack was a laundry list of classic rock songs (no complaints from me on that), and it seemed a little whimsical that the main ship in the movie shared the same name as the bassist from Led Zeppelin. That was fun. The rest of the film wasn’t. Perhaps Berg was winking a little through the naming of a naval vessel, but the rest of the film was played straight, following everything needed in a Transformer’s rip off. (CS: John Paul Jones is also the name of a naval commander during the American Revolutionary War, which is likely where the name came from. Though to be fair, the Led Zeppelin bassist got his stage name from a 1959 movie titled after and about that commander) Before moving on, I have one more thing to say about the music. This is just yet another movie that uses Fortunate Son by CCR without any comprehension at all for what that great song was actually about. Fist pumping, right?

Enough question marks. I’ve overused them in this piece, and the patience of all of us towards them is running out.

Taylor Kitsch as an action lead, right? Silence. Between this and fellow 2012 financial bomb, John Carter, Kitsch’s star fell to earth. I honestly don’t think that is because of his acting abilities. He is quite capable, but in Battleship he basically played Sam Worthington (Avatar) with legs. His character was supposed to be a little rough, who needed to understand about rising to the challenge, but there were severe issues with how his character was written. The movie’s opening establishes him as an absolute idiot, criminal, drunk, tail chaser who we are told to cheer for just because. I guess they assumed we’d like him. After all, they assumed we’d be heading to theatres with excitement over a game that can literally be replaced with two sheets of graph paper and two pencils. Heck, one shared pencil could be used. Or normal lined paper with the aid of a ruler. Or no ruler. Who cares if the graph is neat and clean. (CS: It was a popular pen and paper game before the board game version.)

There is a lot in this movie that recalls the types of things that I generally don’t like in films. Have you ever noticed that when movies have a sports scene there is commentator track for some reason, as though this little event is being broadcast on ESPN? There’s a moment like that in here, with a soccer game that doesn’t even have the smallest of bleachers. It’s honestly a small and irrelevant thing to really criticize a movie for, I only bring it up to highlight the fact that most aspects in this film, the big as well as the small, are those types of things that make it a frustrating movie.

Oh, Jesse Plemons is in here, so that’s awesome. This film came out way before I was on Team Plemons, but it shows why I should have liked him all of those years ago. And Rihanna’s performance is really quite good as well. Amongst all of this sinking of battleships, two secondary characters were enough for me to give it one star out of four. Even though he never has a lot of screen time, Plemons has become one of my favourite actors of present.
Battleship Jesse Plemons Movies Peter Berg Review Rihanna Scott Martin Taylor Kitsch