Scott Martin Guest Post: Is 'Men at Work' As Bad as Its Reputation? 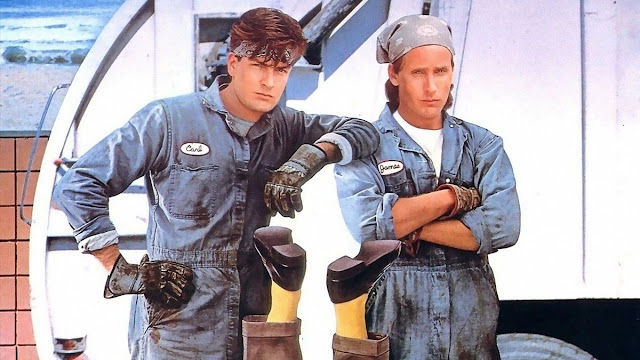 This week my The Movie Breakdown co-host reviews the Emilio Estevez starring and directed buddy action-comedy Men At Work to not only to see if it deserves its reputation as a bad movie but if it is as bad as he has believed it to be since revisiting again in his 20s.

When I was quite young, I really loved the Emilio Estevez written and directed Men at Work. Honestly, I was sold on this film from the moment I saw the first commercial for it on television. Estevez and his brother, Charlie Sheen, were playing garbage men who threw garbage cans around and acted in a far from professional manner. There had been a point in my childhood where I thought being a spy would be awesome because it meant you could hide in garbage cans, so this film was pretty much aligned with my interests right from the start.

Because I didn’t get to see it in theatres, the first chance I had was on VHS. Sold! Right from the get-go, this movie was all I had wanted. Many times, a film won’t live up to the expectations of a young person (Jaws 4), but Men at Work hit all of the sweet spots for me. I laughed a lot. Goodness. The movie was one of the funniest things I had ever seen.

The passage of years, as well as growing maturity seemed to line me up for a negative experience later on with this film. When I was in my early 20s and hanging out with friends, I convinced people to rent Men at Work. Renting movies was just part of life at that age. The video store experience was dependent on the number of people involved in the rental. When there are five of you walking up and down the aisles, decisions do not come easy. Most importantly, if you want to have a say, you need to have made your voice credible. Should you suggest a film that turns out to be a failure, your influence diminishes instantly.

Through some sort of persuasion, I got my friends to accept Men at Work as the choice, but when we got back to someone’s apartment to watch it, I quickly saw my standing in the video rental world crashing to the ground. Nobody was laughing. I wasn’t laughing. Nothing happening in the movie was funny. Nothing was entertaining. All I saw was a blazing mess that I had inflicted on others. The movie, from that moment on, was dead to me.

Who you watch a movie with can absolutely dictate how you enjoy it. You may think that statement is a bit strong, as the appreciation of a movie is subjective, and the individual makes their own decision. That would be the ideal, but we as human beings can be susceptible to influences from others. Picking that film, and then knowing my reputation was on the line, waiting for jokes that I had believed to be killer only to hear not a single laugh, ultimately did change my perception of Men at Work. If you watch a movie full of swear words, sex, and gore with your conservative parents, are you going to be able to fully immerse yourself, or are you going to be worrying about what they think of you for bringing that film in front of them?

Since that night, I chalked my younger impressions of Men at Work to just be another case of me liking something stupid when I was younger. Lately, I’ve found myself wondering, ‘was it really that bad?’ Once again, I rented the film, this time on my own. The goal was to see if my feelings on the film had been unfairly altered by the viewing with my friends.

I can now say that Men at Work isn’t at all as bad as I remembered from my early 20s. As well, it isn’t as good as I remembered from my early teens. Without having to worry about the judgments of other people, I was able to have a much more honest approach to the film. I shouldn’t have been too surprised that I enjoyed a lot of the movie this time around. Emilio Estevez, Charlie Sheen, and Keith David are all people I enjoy a lot. Recently I read something that noted this as Sheen’s first comedy role, but I suppose Major League is to be considered a dramatic, in-depth look at the gritty human spirit through the eyes of sport. Regardless, Sheen hadn’t primarily been in comedies, and Men at Work showed just how natural it was for him.

The jokes that I expected to land with a thud mostly still worked on some level for me. The same charm that grabbed me in the early 90s was evident again. There were some chuckles, and many lines that I all of a sudden remembered increased the enjoyment. A hit of nostalgia helped it out greatly. The run time was skipping along at a good rate, and I was all in.

Everything wasn’t great, though. Some of the more slapstick moments were boring and out of place. Not everything had aged well, both with the evolution of comedy and cinema, as well as the evolution of my own tastes and preferences. The biggest struggle of the film was the third act, where the now overriding forced comedy dragged the film down a few steps. Many elements of the movie were a tad over drizzled in ‘hilarity.’

I cannot fully recommend this film. The nature of the movie, ordinary people all of a sudden caught up in danger, is a brand of comedy that I’ve always enjoyed. Men at Work’s problems may be from the fact that the danger is never adding tension, because Estevez’s priority is to make the villain and his henchmen caricatures. If there isn’t any actual feeling of threat from the villains, then I’m not sure why this comedy sub-genre was chosen in the first place.

Part misfire, part nostalgia trip, Men at Work is not nearly as bad as I remember. That experience with my friends affected my opinions on the film for just over twenty years. Every time I thought about Men at Work since that viewing, I was convinced that it was actually one of the worst movies made in 1990. Perspective can be affected so greatly by viewing circumstances, and I’m quite glad I decided to see which set of memories of this film were correct.
Charlie Sheen Emilio Estevez Men at Work Movies Review Scott Martin