Scott Guest Review: Is 'Cool as Ice' so Bad That You Must See It? 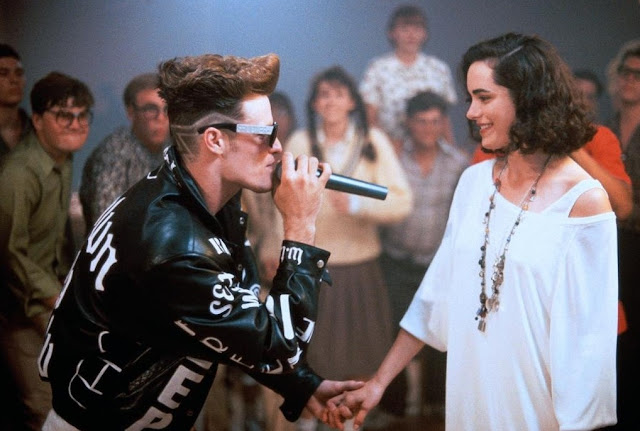 (CS: Some things in life are inevitable and Scott reviewing the Vanilla Ice star vehicle, Cool as Ice was one of those things)

Sometimes a celebrity turns into a joke. They may get cast in a film where they sit at a bar, and their cameo alone is the gag. That’s what has happened to the legacy of Vanilla Ice, but you can believe me that when I was in grade seven, I didn’t see him that way. His album, To the Extreme, had two big hits. He had a style. He was cool. How cool, you ask? Cool as ice, it would turn out.

Yep, I was a fan, and so were my friends. I had no clue at the time that there was going to be a film starring Vanilla Ice, and I don’t think my friends at the time knew. That film, Cool as Ice, started shooting in April of 1991 and was released in October of the same year. Apparently, the movie started getting developed after Vanilla Ice’s record label caught wind of Ice Cube getting into a film and decided to get their artist into a flick of his own. Ice Cube’s movie may have ended up having just a tiny bit more success, as Boyz n The Hood not only got nominated for Oscars, but also became a landmark film, as well as launching a successful acting career for the rapper. (CS: This is all true, but who is the one who can say that he has regular cameos in Happy Madison movies?)

It wasn't until my late teens when I found out that Vanilla Ice had been in a movie, more than a little late to the party. (CS: Having cable at the time, I was flooded with ads for Cool as Ice when it was released in theatres, but by that point, he had already lost some of his edge for me) At the time, I thought nothing of it. However, through the years I would hear from folks who had witnessed Cool as Ice, and its reputation as a bad movie grew. The world is full of bad movies, but there is something special about the ones that people say you have to see to believe, and Cool as Ice was repeatedly being described as such.

Last week I finally saw it. Last week I personally investigated to see if this was one of those movies that was so bad that you had to see it to believe it. Too many times a movie will get talked up and the experience of seeing it will be a let-down. That’s not what happened here. From the start of the film to the merciful end, I witnessed a nonstop barrage of cringe-worthy scenes.

What is most interesting about this film is the amount of embarrassment I felt while watching it. Sometimes you see something on the television or in a movie and it stirs in you this sense of vicarious shame for what someone else has done. Cool as Ice is like some sort of unethical human experiment devised by sociologists and psychologists to see just how discomforted viewers could become from witnessing what out of touch suits produce as an offering of cool to the youthful viewers.

Have you heard a parent in the mall (remember those things?) say something is radical or hip, only to have their offspring’s face turn red as they speed up their pace to distance themselves? This movie is that experience happening on repeat over ninety-one minutes.

Many people out there enjoy watching bad movies. I am one of those people. The problem is that I’d say the majority of ‘bad’ movies aren’t entertainingly bad. Many films just miss the mark with their execution or concept, and they don’t connect with the audience. Sometimes you get a Battlefield Earth, which is a rare example of the big budget movie of the modern era that is so awful you really have to see it. Others of its kind exist, but they aren’t plentiful. Sometimes I find the most alluring part about bad movies is the pursuit itself. Each time you tuck into something, you have a hope that this film will be one where your mind is blown by what you see. Often, the viewing experience isn’t something that will hit that sweet spot that you are craving.

Cool as Ice is that film that makes the hunt worthwhile. This is the experience you’re after that allows you to sit through so many dull films in search of the one that leaves you in awe. My jaw literally was wide open countless times throughout this film, as I was constantly stunned by the fact that actual adults made the decisions that became the reality I was watching. If I had known that this film was conceptualized and executed by seventh graders, it would still be fun to watch, but there would have been a cuteness to it. Adults did this. Humans with life experience and education were the brains that slapped this together and believed that this was a good idea. This was the unbelievable part of this film, as it felt more like it should have come from under-baked minds of prepubescent boys.

In the movie, Ice’s character Johnny ends up in a small town, and he seems to use the power of ‘cool’ to do whatever it is that he does. Ultimately, he has to help out the family of a cute small-town girl, as criminals from her father’s past suddenly show up to cause problems. Nobody saw this coming. Her father, who we find out was in witness protection, seems to have thought that appearing in an interview on television is a good idea. (CS: But without doing it, he'd never had got some cool in his life) Who will save this family from the idiocy of the father? Obviously, the person who is cool and has a motorcycle.

I don’t harbor hatred towards Robert Van Winkle (Vanilla Ice’s real name). He’s got a show about home renovations and seems to be very skilled at what he does. Good for him, sincerely. However, I think the warning signs about his abilities (or limitations) were present from the start. If you are a rapper or singer, and the images of you dancing in your music videos are always silhouettes, it lets us know pretty quickly you can’t dance. There’s nothing wrong with someone who can’t dance, but it is kind of embarrassing when people try in such an obvious manner to present themselves as something they aren’t. Perhaps all of Ice’s scenes should have only shown his silhouette. That decision may have been better for the integrity of the project, but we wouldn’t have this gem of an awful movie. This is a perfect drinking game movie, but if you’re taking a shot every time you are in disbelief at what you see, you may end up in the hospital.
Cool as Ice Movie. Review Scott Martin Vanilla Ice