Scott Martin Guest Review: Did 'The Adventures of Pluto Nash' Deserve to Be an All-Time Box Office Bomb? 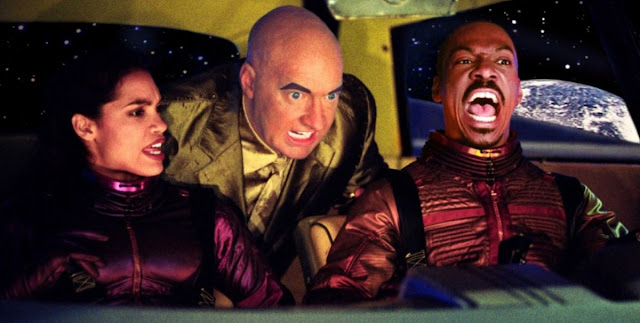 (CS: I have proudly lived a life where I can say that I've never watched a second of The Adventure of Pluto Nash. This is not a thing that my The Movie Breakdown co-host, Scott Martin, can say anymore. In his quest to see if universally panned movies really deserve their reputations, he has now stumbled upon this Eddie Murphy box-office bomb.)

When The Adventures of Pluto Nash came into theatres in 2002, it was already in a bad position. Reshoots were needed to increase the quality after it did poorly in test screenings, and the cost of the film jumped from $80 million to $100 million. At least they had the star power of Eddie Murphy to help it get across the financial finish line, right? Well, Dr. Dolittle 2 came out the year previous, and showed pretty large diminishing returns from the first film. Still, I honestly would think that the name of Murphy alone should have at least given it a solid opening weekend.

When it hit theatres on August 16, 2002, it set a new record for the worst opening weekend for a film debuting in over 2,000 theatres. Pluto Nash only managed to scrape up $2.1 million in the domestic box office. Its second weekend saw a massive plunge in dollars, causing it to be bumped from most of theatres. After adding in the international tally, Pluto Nash brought in $7.1 million. I’m not sure what the budget was for marketing, but I know this is considered to be one of the biggest box office bombs in history.

When I was young, Eddie Murphy was superhuman to me. My bootlegged cassettes of Raw and Delirious pretty much got worn to oblivion. Beverly Hills Cop seemed a masterpiece to my youthful eyes (no surprise here, it is still one of the best action comedies out there), and he could do no wrong. And then The Nutty Professor had me checking out a bit. And then Dr. Dolittle pushed me a bit more to the sidelines. When I saw Bowfinger in theatres, I was so pumped by the return of Murphy. More than anything, I always want to see him nail it in movies to reinforce my memories of him as a child. That makes looking at something like Pluto Nash a dangerous endeavour. I want no ill memories of Murphy. And sure, it was a bomb, but could it be actually that bad?

Pluto Nash was a massive bomb theatrically, that can’t be denied, but there’s no way it could deserve one of the most embarrassing openings of the time. That’s what I had told myself before watching it. And now I can say, yes, it is that bad.

If you’ve read my stuff or heard the podcast, you will know that I am drawn to ‘bad’ movies. A bad movie is one that misses the mark, and sometimes missing the mark is rather engaging. People out there are trying really hard (usually), but not everything is golden. Chris and I enjoy when a film is being ambitious or not being afraid of being out there, and while we criticize, we honestly do appreciate the effort. Other films, however, are an insult to the audience, come across as mean, and promote some horrendous things. I don’t believe the worst movies to watch fall into either category, as both the ambitious or monstrous give lots to talk about. The worst kind of film to watch is what Pluto Nash is, and that is the downright boring.

A movie like Butterfly may be more difficult to push through until the end, but there is substance to that experience. We can look at the film and hit a great number of ethical or sociological talking points. When you see a boring film, you just hate your decision. There is pretty much very little that it leaves you with, because more than likely you end up doing some solid daydreaming during it.

Twenty minutes in was the first time I realized that I had stopped paying attention. I know I had checked out earlier in the film, but this was when I was aware of it. There was moment in the movie when I thought, “Crap heck! When did Luiz Guzman arrive? Has he been there for just mere moments, or have I lost actual minutes of this film?” The truth was I had lost probably about ten minutes. My phone wasn’t a distraction. I wasn’t multitasking. The film was just such that my mind wandering off in circles was easier to do than keep paying attention.

The movie is set in the future, and people live on the moon. Pluto Nash gets a nightclub, but then a bad guy wants to buy it from him because of gambling something or other. Rosario Dawson is in it as a young woman who needs a job. (CS: Probably also the reason she took this role) Probably the only semi-interesting character, but still not that engaging. Randy Quaid plays Nash’s robot bodyguard, Bruno. This, I must admit, is horrendous. The concept is not executed well, and Quaid’s performance is… without proper words. (CS: Kind of like how you could describe the real-life Quaid now)

When I came into the present at the twenty-minute mark, I started asking myself if this was a comedy. At this point, I had to hit pause and check out IMDB. Yes, it is a comedy, and there was one point when I smiled. One of the characters (don’t ask me who, I’m just happy enough that I remember a detail of the film) is handling cash monies, and Hillary Clinton’s face is on the bills. Remember, this was released back in 2002, so I got a kick out of it.

The most productive thing to come from the viewing experience is that I have decided on my next movie to check out. I’m planning on digging into Paul Shore in In the Army Now, (CS: I for some reason keep getting this movie confused with Jury Duty, but they also may be interchangeable) which wasn’t already on my list. Because of this, something productive came from Pluto Nash. If all I get from a movie is an idea of what other bad films are out there, it is sad. This isn’t the most horrible film out there, but it is one that falls into the worst category of movie, and that’s the one that offers nothing but boredom. (CS: Confession time, I got this movie confused with The Meteor Man)
Eddie Murphy Movies Review Scott Martin The Adventures of Pluto Nash