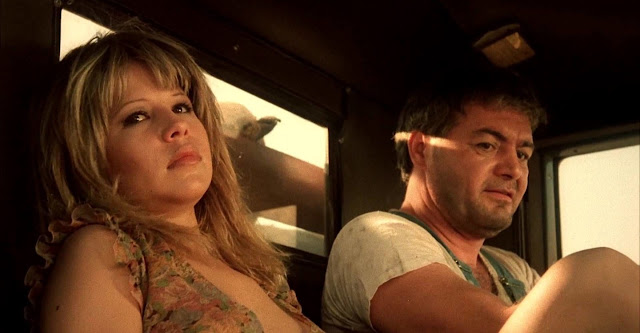 (CS: Bad movies have existed forever. The most interesting bad movies are the ones that somehow got some awards recognition despite everyone else thinking they are the worst. Scott explores that kind of movie in 1982's Butterfly, which received both Golden Globe and Razzie nominations.)

In my desire to search out movies with a bad reputation in order to see if they deserve it, there will be times when I want nothing more than to walk away. Hit the pause button, close the laptop, walk outside and remember that there are many blessings around. Not everything in life will be great, but perspective can put a spin on almost anything. When you’re trying to erase Butterfly from your mind, almost anything, no matter how awful, will put you in a better place. Yep, thinking about taxes and sores in all the wrong places are better for your long-term mental health than the memories of this movie.

The 1982 film, directed by Matt Climber who had previously used aliases such as Rinehart Segway to make fare of the more ‘adult’ variety, was an adaptation of a novel of the same name. Starring Pia Zadora in her debut (excluding Santa Claus Conquers the Martians), the film was financed by her millionaire then husband, Meshulam Riklis. Essentially, Riklis wanted his wife to be a star, and he thought putting her in a movie with taboo sex (incest) would quickly get her noticed by the folk in Tinsel Town. (CS: Climber was also the co-founder of 1980s camp wrestling company, GLOW - Gorgeous Ladies of Wrestling).

What really made me want to investigate this film was that Zadora won the Golden Globe for New Star of the Year in a Motion Picture, while also winning the Razzie awards for Worst New Star and Worst Actress. On top of that, Orson Welles was also nominated for both a Golden Globe and Razzie for his supporting performance. I felt the need to find out if the film was good enough for a total of three Globes, or if it was really that bad to deserve its ten Razzie nomination, winning in three categories.

Having now seen the film, yes, it is more on the side of bad than it is of good. Part of that is because of the tone-def nature from Rinehart Segway (a solid adult entertainment pseudonym). The material is of incest. A guy (Stacy Keach) lives alone, and his estranged daughter swings by to visit. Oh boy, do these two end up wanting to get down and dirty. Eventually they go all the way, but only after Keach finds out she isn’t really his daughter. I guess that makes it all better? Hardly. Zadora’s character still thought he was her father, and that doesn’t erase all the naughty physical acts that happened previously when Keach believed they were related. Oh, and she’s only seventeen. That makes nothing better (CS: Welcome to 1980s cinema where there was a lot of scuzzy sexploitation cinema being peddled out to make a quick buck. Some of it even became big box office hits like Porky's and Blue Lagoon. This is why I laugh off people who try to claim entertainment has got raunchier in the decades since).

The main issue is that good ol’ Rinehart shoots the aspects of incest in a way to arouse the viewer. Everything is done to sexually stimulate, and the only things it misses are a photocopy repair man showing up and a sultry yet groovy bass line. Chris and I have said a bunch of times on the podcast that anything can be done in movies. However, certain things really need a gentle and appropriate tone. Incest is one of them. A big one. Really big. Incest isn’t a good thing to romanticize.

When it comes down to the performances of Zadora and Welles, they aren’t good. Welles is phoning it in, and Zadora cannot act. The dialogue and overall theme of the film doesn’t help them. Amateurish is a good word to sum up many aspects of this movie. Could I have done a better job? Yes, I would have. And I would have accomplished that by making sure this thing never got created in the first place.

Since it is that bad, the Golden Globe nominations may be surprising. Surprising as well is that the film won the awards six days before it was even released in theatres. Seeing as how the entire movie was an effort by Riklis to shoot his wife into Hollywood stardom, it’s not a shock to find out that he flew members of the Hollywood Foreign Press Association (the people who vote for the Golden Globes) to Las Vegas for a private screening. That may not seem totally above board. The fact that he then brought more of them to a screening at his Beverly Hills mansion six weeks later really makes all of this rather suspicious.

When it comes to the Golden Globes, I’d like to think that they wouldn’t be susceptible to efforts like this. The truth is, I have completely no faith in the Globes at all. An independent film about sensual incest that hasn’t even hit theatres yet getting these nominations stinks, especially when you sit down to watch the film and see how sad the acting is.

I’ve wanted to turn off a few films before. Usually it is because I feel disgusted. Butterfly made me feel dirty in so many ways. The concept may have worked, but not with Rinehart directing it. Honestly, I think Zadora would have done much better under a capable helmer, but I think Riklis was more interested in a sexual and arousing film for his wife to star in.