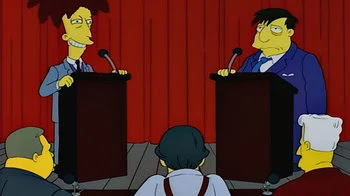 The US election results haven't turned out the way that I hoped. Though my hope was more a fantasy where Joe Biden crushed Donald Trump in the electoral college votes and then Trump immediately after was swallowed by a dragon to never be seen again. But it is now becoming clear that it may not have been realistic hopes.

Instead, it is the morning after election night and things are so tight that we don't have a winner yet and it is very likely that we won't have one for several days and maybe weeks (2000 US election anyone?). Not knowing who is going to be the next US President is never ideal, but this time we have a tight election that is likely going to further divide a country and ignite the flaming dogshit bag of fraud and conspiracy claims. The volcano of hostility and unrest had already erupted months ago, but the lava is about to start flowing again with even more damage to be done.

Even when a winner is declared, there is likely to be thousands who will dispute the results and some of those may work out their issues in the most damaging of ways. They will be stoked and prodded by authority figures who will refuse to condemn or at worse outright encourage the activity of destruction. The best-case scenario is the war is mostly waged on social media because the block/mute button exists for a reason. My instincts are that the next several weeks are going to reveal how toxic the festering wounds of a nation and society have become.

Wow, this is an optimistic and cheery start to Wednesday. To be fair, this is just me hypothesizing based off how the last four years have turned out and knowing how flames of discontent have been stoked by those in a place of authority. We can all prove me wrong and push back against vile instincts of aggression, venom and destruction. Despite what has been the narrative for the last four plus years, we can remember that true strength comes from compassion, kindness and generosity.

While we don't have a winner yet, we do have another clear representation of the character of the two candidates and a sign of how the next four years could unfold. One candidate has handled the uncertainty and unpredictability with humility and grace and acted in the way of a real president even if he may never ever be one. He has asked people to remain calm and patient. The other followed his modus operandi by throwing a temper tantrum and peddled out his usual con game of lies to coat his insecurities and thin skin. He has furthered his agenda of discrediting news and facts.

I haven't talked about politics much in the last several years because the way it has been discussed on the internet has been a constant Mike Tyson gut-punch that has blasted out all my energy. Four years ago, when Donald Trump was elected President of the United States, it actually dragged me into a deep depression. I was terrified of the damage and harm that would happen with an insecure, immature, volatile. racist, misogynistic, inept, selfish, toxic conman in power of the most influential and impactful nations in the world.

The thing that knocked me emotionally to the ground for several months was realizing how wounded the United States had to be for so many people thinking Trump was the best option. Good and reasonable people voted in an Orange Goblin. Trump is a racist. Trump is a narcissist. Trump is a misogynist. Trump is a liar. Trump is awful at business. Trump is insecure. Trump is a bully. Trump handles criticism and confrontation worse than my five- and eight year-old kids. Trump is incompetent. Yet Trump is president. Something has gotten so bad for certain people that they've happily drank Trump's Kool-Aid and after four years of Trump proving how unqualified he is at this job that people still thought he was worth voting for again.

As a Canadian, I'm not letting my fellow country people off the hook. I've seen many social media posts from people that I know are normally good and intelligent people that have jumped on the Trump bandwagon to Hades. At this point, I don't think there is a single person in the world that isn't aware that Trump is a liar and contradicts himself often in the same sentence. I have not ever heard anyone argue that Trump is not all the awful traits that I've detailed here. Most people are well-aware he has discredited the news because it hasn't lauded him as the second coming or been willing to be his propaganda machine. But for whatever reason, he has offered things that appeal to certain people and so they cling to him despite all the other poison that comes with the package, We all know who Trump is, and how harmful he is to so many people, but a significant group has attached to him because there is one promise (that he may not even keep) that is something they feel is worth enduring everything else.

He might win. He will definitely be claiming he won for the next several months. All that makes me feel the tendrils of depression wrapping around me again. But I'm not letting this happen this time. I can't control who is going to be the leader of the country to the south of me, but I sure as hell can control how I respond. The people of both countries have control over themselves and how we treat each other. We can make a great society no matter who may be on top. Things are going to be rough, but we still can control the narrative of our lives.

You may notice this has been a lot about Trump and almost nothing about Biden. Being Canadian, I can't vote in this election, but if I could, it would have been one for 'Not Trump' rather than someone I really wanted as president. It sometimes must be that way. It has been that way for me with most Canadian elections over the last decade or so.

Here we are now with no clear winner from the presidential election. I am not sure how this is going to end. I can't know for sure how people will respond. But I can control how I am going to respond and who I am going to be as a person. I can help craft how I want my life to be and how I decide to treat those around me and who I decide to associate with in my life. I've decided that this is still going to be a year where I have positive memories and do things that I can be proud of. An authority figure does not need to define and craft how the citizens behave and the way we interact with each other. We can be better.